I mentioned in my last that my researches had thrown up a new puzzle, and in this entry I'll explain what - or rather, who - that is.

When reading Daniel Southwell's letters home I was puzzled to come across numerous references to a cousin of his on one of other First Fleet ships, HMS Prince of Wales, by the name of Daniel Butler. The various mentions of him, though mostly in passing, combine to give quite a vivid sense of this mysterious young man's character...


So, it appears I have not one but two ancestors in the First Fleet, but what do we know about young Daniel Butler? He's a kinsman of Southwell and well known both to his mother and to Uncle Weeden. He does not, however, appear on my family tree! The Australian historians have been busy, though, and are able to add a bit more. According to this site, he was born in 1772 and served as a ship's boy, both of which sound right from Southwell's references. On the other hand, they also claim that he was a clergyman's son, which I don't think can be true. I suspect that they're assuming he's Weeden's son, but a) I know all of Weeden's children, and he isn't one of them, and b) the way Weeden refers to him is affectionate rather than paternal ("Daniel Butler has now been transferred to another master"). There were no other clergymen among Weeden's brothers.

Drawing offers another line of enquiry. It seems that Surveyor General Alt was a good choice to keep an eye out for Dan Butler, because the boy was something of an artist, albeit not a very good one. Dan seems to have been a text-book example of being in the right place at the right time, however, and the fact that he was just about the first European to draw any indigenous Australian fish has earned him a place in the Dictionary of Australian Artists, and given unfortunate scholars the task of figuring out what on earth he was looking at. Here's an example of his work, complete with signature: 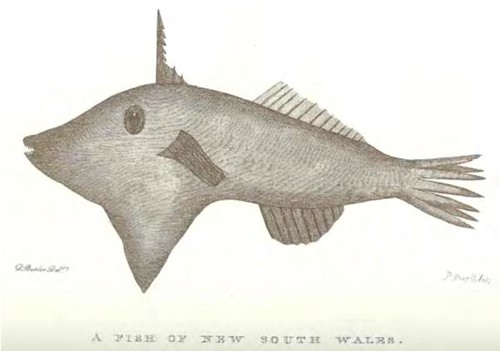 Definitely Some Sort of Fish

Actually they're fairly confident this one is a leatherjacket, but Dan's other efforts have left historians of ichthyic art scratching their heads. I think it's fair to say that this isn't bad for a 15/16 year old, and it's certainly better than I could do even now, but it's not really that good either. On the other hand, remember Cousin Southwell and the banana in the last entry: when you don't have the relevant schema to hand, your drawing will go awry, so let's cut Dan some slack.

I have two main theories about who Daniel Butler was...

What became of Dan? From 1793 he disappears from history, as far as I can see, and by this point the Australian historians have lost interest because he's no longer there. Probably he was magicked back to 1980 none the worse for his adventure, but another possibility is raised by Daniel Southwell's final letter to Weeden. When I was running out of time at the BL I skipped to the end of the volume, and the very last one, written after Southwell's return to England, ends with this bleak but tantalizing PS:

Does my enquiry about Dan. B. slip your memory or has any thing particular come to hand? I have left off to ask my mother, as possibly she might not like to inform me of any mishap but you Uncle need not be sway’d by any such reasons. We know “we’re born to die”. I was going to say particularly soldiers and sailors, and you yourself once did tell me or ask me, if “Botany Bay would not sound as well at the Day as Nicholas Lane or Chelsea.”* So also I imagine Africa, or the sea between it and us. (June 30th 1793, to Weeden - from Portsmouth)

So perhaps to find Daniel Butler's mortal remains we must look to Africa. Or to the sea between it and us.

Over there and under him
The horse supporting Richard my king
Began galloping too fast for him.
The horse's hooves came tumbling down
Close by my burying ground:
Forever we are bound on Redmore plain.

For some reason, this is the song that's stuck in my head right now.
Collapse