I'm beginning to sort through the family papers...

The good news: my grandfather, Montagu Christie Butler, was an organized man, who clearly anticipated the requirements of future biographers, and against that day put his affairs in order to the extent of typing out documents of interest and sorting them into stout manilla envelopes, divided year by year and in some cases by month by month. At the moment, I'm looking at the material leading up to his marriage to my grandmother Amy in August 1911.

The bad news: most of these documents, including their love letters, are in Esperanto. I may have to make another effort at learning it.

The good news, Part II: Google Translate is certainly good enough to get across the gist, and MCB helpfully glosses some of the letters in red type.

One serious problem early in their relationship appears to have been the class difference - or at least, the usual in-law tensions seem to have found a focus there. Amy's family was not well off. Her father, John Ferguson, had been a printer from Glasgow, who moved to London and married Alice Cook, the daughter of a wheelwright. Unfortunately John died young, and while Amy's brothers took on fairly low paid clerical jobs, she and her mother and sisters turned to dressmaking to make ends meet. She and MCB were already engaged when, in October 1910, her older brother Wally died of typhoid, in the wake of which her mother broke down, dying a month later. (At that point Amy was 25.) A niece followed within weeks, and her younger brother Charlie early the next year. So, in the spring and summer of 1911, I can see why she might have been feeling vulnerable, not least in the area of family.

It was at this point that MCB's brother Guido made some ill-judged remarks, the exact nature of which I'm still trying to determine. Either he "swanked" about the Butlers himself (MCB's word), or else he accused them of swanking. Whatever he said, it put Amy right off meeting MCB's extended family. MCB's immediate relations weren't very imposing: his father, Thomas Robinson Butler (whose school memoirs I've written up in this LJ), was a humble curate, and their means were modest - but there were rumours of grander Butlers around every corner, all of them ready to look down their collective nose at poor Amy.

The first sign of trouble came when MCB's aunt Annie Robina died in March 1911, and Amy stayed away from the funeral for fear of humiliation. After that, with the wedding just months away, there was increasing pressure to meet the relatives, and MCB took it on himself to persuade his fiancée that she'd got the wrong end of the stick. Here's an effort dated 7th June, which an older MCB has ominously glossed "A little rift within the lute"...


While I sympathize with MCB, caught in the middle between his fiancée and his family, I'm not sure that his strategy of telling Amy the problem is all in her head is really a winner. He was still having to work hard in a letter of 20th July, just weeks before the wedding, to persuade her to visit his rich relatives in Reigate. In this one he has changed tack slightly and is assuring her that true gentility lies in behaviour rather than birth. That perhaps proved a more fruitful line of argument, since the visit duly took place, and according to the older MCB at least, "we both spent a very happy day with Gerard and all the cousins (Bella, Dick, etc) in woods around Reigate".

The Reigate relatives were Gerard Weeden Butler (a cousin of MCB's father) and his family. I've barely mentioned Gerard before (just once, in fact), largely because I don't know much about him, but I'm going to have to remedy that, since my desultory googling has revealed that he is in fact a classic Butler, if we take Butlerism in the sense in which I have previously defined it, as that of becoming expert in two apparently unrelated subjects and then finding ways to combine them.

In Gerard Weeden's case, the two subjects were cycling and geology. Or perhaps we should say that he was a cycling geologist's companion, that person being Grenville Arthur James Cole, who in 1894 published The Gypsy Road, his account of a journey of geological discovery from Krakow to Coblentz, which he had undertaken with Butler the previous year. The journey, of some 1,055 miles, was completed in 38 days - a feat that is more impressive when you remember that Gerard Weeden did it on a penny-farthing, without gears. (Cole was on a tricycle.) I've yet to read the book, but according to this account, "Butler is named throughout the narrative as the 'Intellectual Observer', and comes across as being a man of quiet wit and perception," although "little is known" of him except that he enjoyed painting and may have been a mathematician. Surely we can do better than that?

Unfortunately, amongst all my grandfather's photographs, there is none of Gerard Weeden. We have his father, and his children, but so far the only picture I have of Gerard Weeden himself is this illustration from The Gypsy Road, of him powering his penny-farthing through the Hungarian alluvial plains. 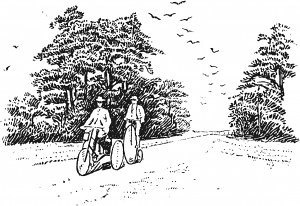 I don't think I'd be able to pick him out from a crowd.
Collapse