Full blue moon shining.
Doubtless these clouds are lovely
When seen from above.

Magpie, gull and crow
Haggle for the dawn beyond
My blinded window. 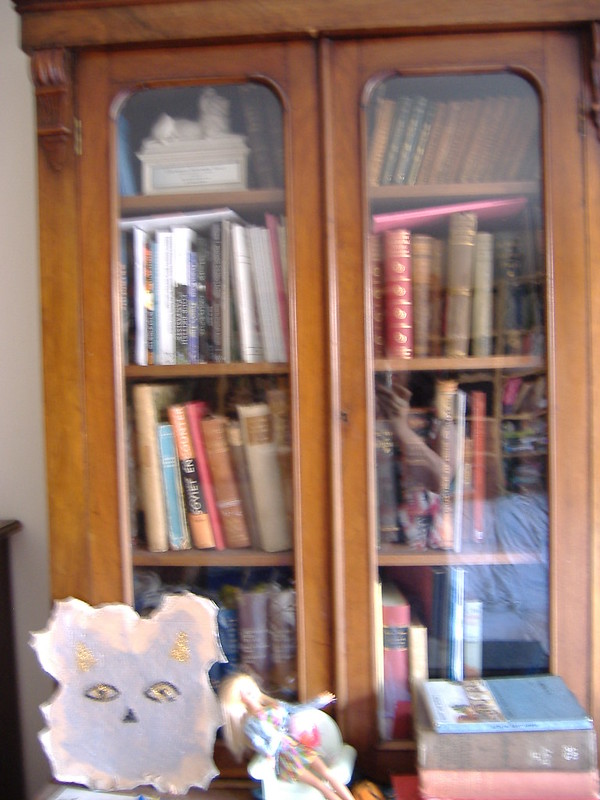 This blurry (sorry) photograph shows the bookcase I use for my "special" books: the ones that are fragile, or old, or have some personal significance. A lot of my family stuff is in there, as well as copies of my own books, and at the top left you'll see my Mythopoeic Award. It's a nice piece of furniture: I inherited it from my father.

The case is kept shut by a simple single-lever mortice lock, with a small key. Unfortunately, about six months ago the key went missing, and despite many searches it's failed to reappear. I tried picking the lock with a hairpin, and got a more competent friend who'd watched Youtube videos on the subject to have a go with some more likely looking equipment, but neither of us succeeded. The couple of locksmiths I've tried so far aren't interested in this kind of thing. I've been to junk shops and second-hand furniture shops on the Gloucester Rd, and borrowed keys to try in the lock (it's a very simple one, as I say), but so far none has fitted.

Can anyone suggest a way of getting into this bookcase, short of breaking it? It's beginning to annoy me.
Collapse