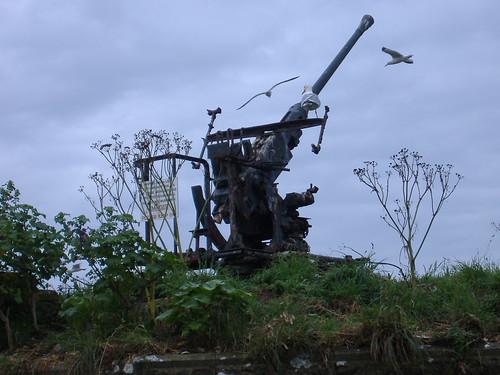 I said I'd try to do a more extensive write-up of my Steep Holm day. This isn't exactly that, and there's quite a bit I've left out, but here at least are more photographs, which I've blended with some of the poems I wrote on the day (and just after). Hopefully it will "give you the feel", as Wordsworth was so fond of saying off-mike. There's a lot more to Steep Holm than the military, of course, but this set seems to have coagulated around that theme.

I enjoyed the BBC Richard II a lot, and had been looking forward greatly to 1 Henry IV, and especially Simon Russell Beale as Falstaff - a role one might think him born and made for.

I've just watched it on iPlayer; and while there was much to like about it (the shots of the frost-bitten battleground of Shrewsbury, for example), in the end I didn't feel satisfied by the production. Partly it was that Tom Hiddlestone as Prince Hal kept reminding me involuntarily of Andrew Motion, perhaps the least martial of living poets; but mostly it was SRB's Falstaff, or rather what his Falstaff did to the balance of the play as a whole.

It's not that you can't make a case for playing Falstaff as embittered, cynical, joyless, bored and so on, and certainly SRB played him well enough in that vein. But a) that is a modulation probably best reserved for the more wintery atmosphere of 2 Henry IV (where can SRB go with this performance next week?); and b) 1 Henry IV is Shakespeare's ultimate ensemble piece: here more than elsewhere, what you do with one character affects our understanding of the others, and of the whole.

For a long time, in fact, this was my favourite Shakespeare: it was the one play in which I liked something at least about everyone! Different as Falstaff, Hotspur, the King and Hal were (along with their respective mise en scènes), their differences were balanced out in a way that made the sum seem life-affirming.

Thinking about it this evening in terms of this balance, "the key to 1 Henry IV" fell unbidden into my lap. It's about the four humours, of course! There's melancholic Henry IV; choleric Hotspur and Glendower; phlegmatic, self-controlled Hal; and not least, sanguine Falstaff. None of these men is satisfactory in himself, but combine them in the just proportion, and the play achieves a harmony beyond the reach of any of its characters. Now that I've put it that way to myself, the problem with playing Falstaff as SRB played him is apparent: it throws the humoural balance out of whack.

Circa 1970, this kind of insight would have made a nice paper for PMLA. Now, it's just a blog post.
Collapse