I went back to the source, yesterday, and visited the island of Steep Holm for the first time in 13 years. Much walking, much fending off angry gulls, some writing of poetry, and - wonder of wonders - no rain. It's only five miles from Weston-Super-Mare (or 10 minutes by speed boat - things have changed from the one-hour trips of the last millennium), but it's a very different world.

There's much, much more to come, but here is a small taste of the island, with more than a hint of gull...

We were on the island for twelve hours, largely because Weston, being undredged and skirted with lavish margins of mud, can only launch and receive boats at high tide. At the end of the day I sat in front of the Victorian barracks with my new friends (a marine photographer and the ex-rector of Shepton Mallet), looking south to Somerset and waiting for the call to go down to the beach to embark, when my phone went off unexpectedly. I think I'd assumed there'd be no signal, thanks to Steep Holm occupying an alternative reality and all. As it turned out, in the drama of my day this call occupied much the same place as the message to the French Princess at the end of Love's Labours Lost, haling me back to a more mundane reality.

My message, however, turned out to be a eucatastrophe. It was to let me know that after 22 years at UWE, I'd finally made Associate Professor.

Steep Holm will do that kind of thing. 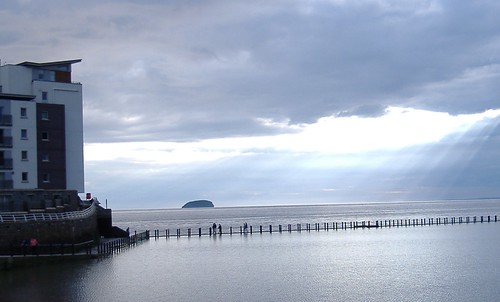