I dislike shibboleths - or rather, I like to think of myself as someone who dislikes them, but actually I like them more than most (I'm complex and interesting, you see).

There's no doubt that they save time, at least. Any discussion of children's literature that misspells "Streatfeild" is cast into outer darkness without further consideration, no shriving time allowed. I feel almost as strongly about "minuscule". I was able to read through the Harry Potter series with equanimity largely because Rowling (who's very fond of the word) never misspelt it - or if she did, it was caught by the Bloomsbury house elves as surely as a Golden Snitch in the hand of a Gryffindor Seeker. That counts for a lot.

Yet, when it comes to "onomatopoeia" and its many variations, I'm very forgiving, feeling in my bones that to ask for more than three vowels in a row is just not English, damn it!

I went to the out-of-town shopping centre this afternoon, partly to shop for clothes and partly for my daughter's birthday, which falls soon. I managed to park very close to Marks and Spencer, and going through the door had to work my way round some barriers, where they were fixing the path.

Two hours later, I went out of Marks and Spencer, past the barriers, to where my car ought to be. No car. I checked my pockets, bag, pockets in bag, performed discreet strip search. No key either.

Clearly my car had been stolen. Clearly my key had fallen from my pocket after I parked, and someone had opportunistically taken it and my car too, leaving me with much shopping, in the rain, several miles from home. It vexed me that this had happened just after I'd had to spend £800 getting the car fixed, but on the whole I was impressed with myself for taking it so philosophically, and it was with a rueful smile that I confessed my misfortune to the security guard whom I met at the door of Marks.

He whisked me to the information desk, where he asked the woman whether a car key had been handed in. It had. It was mine, and had evidently fallen out of my pocket when I was trying something on in Monsoon (well, they did have a 50% sale!). Meanwhile, the same guard had taken my registration number, and passed it to the people in the CCTV room. Within three minutes a natty man in a red jacket came up to me and told me exactly where the car was to be found. Outside a different entrance to Marks, and a different set of - admittedly similar - barriers.

I felt foolish, but my consciousness of folly was somehow diluted by a) the friendliness of everyone involved, and b) the clear impression I got - from their well-oiled efficiency rather than any snark - that this kind of thing happened about 20 times a day. Whereas, the woman behind the desk told me, in the 10 years since the shopping centre opened (and they have room for 5,000 cars), they'd never had a single one stolen. Altogether, it left me feeling much more positively towards the whole of humanity - always excepting, of course, myself.

As part of my ongoing-yet-desultory family researches, I took receipt today (via ABEbooks) of a book about the time of Henry Montagu Butler as Master of Trinity, Cambridge from 1886-1918. It was written by one of his sons, and published in 1925. (In case you're wondering, HMB was first cousin of my great-great-grandfather Thomas.)

I've not had a chance to look at it properly yet, but when I opened it I noticed on the first page a large signature, in pencil, reading "Monty Butler". 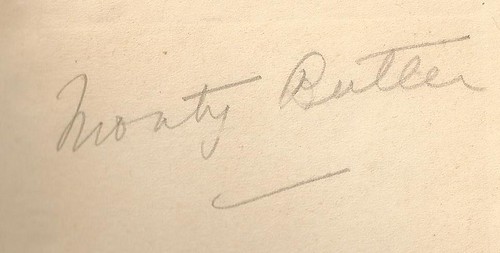 Montagu is a common family name (my grandfather was yet another), so I assume that this book belonged to a relation of mine - and besides, who else would want to read it? Looking through my family tree, however, the only Montagu I can find of the right date (apart from my grandfather, who always went by Christie) is HMB's nephew, Montagu Sherard Dawes Butler, whom I could show you looking slightly less weird but can't resist displaying in his full regalia as President of the Bombay Legislature (1921-22): 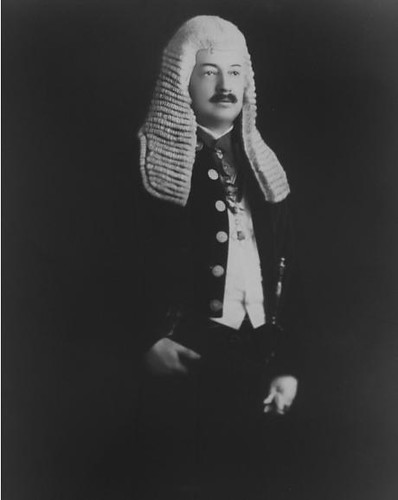 Montagu (or Monty?) Sherard Dawes Butler is known today, if for anything, as the father of R. A. Butler, the Conservative politician. To be honest, he doesn't look like the kind of unbuttoned person who would sign his books in pencil. Is there another Montagu I've missed? Was this a way of signalling his lack of interest in Uncle Henry's achievements? Or did the book belong, after all, to some quite unrelated Butler? If I find any further clues within, I shall post them here.
Collapse