I've been away in the Midlands, primarily to attend my aunt Naomi's funeral - which went well. It took place at Stafford Crematorium, which turns out to be just three miles from Great Haywood (better known to Tolkien aficionados as Tavrobel), where I was obliged to ask directions, for it is a puzzling piece of country in which meandering roads wind aimlessly over dead straight waterways (via awfully narrow bridges), thus reversing the proper order of nature.

The night before the funeral I stayed with friends at nearby Alrewas. There, I was shown this book, from which my friend had learned to read - though not spell - in the 1960s. 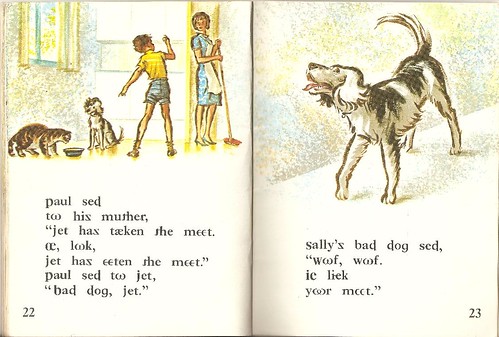 I posted before on the abortive Shavian attempt at English spelling reform. The Initial Teaching Alphabet was a less ambitious scheme, which flourished in Britain (and elsewhere) for about 10 years from the mid-'60s, and was intended to get children reading before they made the move to standard English texts and spelling; but it looks much the same, inasmuch as it's a largely phonemic script. (It's also all in lower case.) I'd heard of it before, but never actually seen it being used to bring great literature to life.

It's hard to believe anyone thought this would be a good idea. Did any of my LJ friends learn to read this way? How was it for you?

I also passed very near to Abbots Bromley. This September I must make an effort finally to see the Horn Dance.
Collapse