I realise this isn't the most important aspect of the affair, but isn't it strange that the BBC can't seem to refer to the Chinese dissident Chen Guangcheng without sticking the word "blind" in front of his name? I mean, his blindness is there in the suite of things that one might mention when introducing Chen to an audience ignorant of his existence, but why bring it up every time, when it's not a material element of his case? The Beeb leaves a fixation on Abu Hamza's hook to the tabloids, but blindness seems to be a different matter.

Well, I walked through the Brizzle drizzle to the Polling Station today to cast my vote. There aren't any elections here this year, so the only question on the ballot was about whether I wanted Bristol to be run by a US-cum-London-style Mayor. Having heard no arguments for changing the system beyond emotive threats that if we didn't we'd be left behind by the Cool Kids, I naturally voted to keep things as they are. I'm not sure what to expect of my fellow Bristolians, though. I suspect that the bad weather will mean that only those randy for change will have been motivated to go and vote - and me, of course, and a few others of the ornery sodden.

A couple of days ago, during a brief sunny interval, I decided to celebrate the end of my first big batch of marking by taking a trip. Despite living in Bristol for 22 years, I'd never visited Dursley, and I thought it was time to make this good. It's about 25 miles north of here, and more to the point just 20 miles north of Winterbourne, where J. K. Rowling grew up. I've long assumed that she gave the name to Harry Potter's unpleasant step-family because she disliked something about the town, and I was curious to see what was wrong with it.

Actually, it's a very pretty, small, Gloucestershire market town, although not a prosperous one, as the Lidl on its approach road blazons from afar. I took several pictures, but I'm unable to get them off my camera as yet, so here is a random one from Flickr, taken from the church tower and showing the pillared market house (a typical Cotswold feature). I did see several roads named after plants, but no Privet Drive, alas - and in fact, Streetmap.co.uk informs me that there's no such road in the country. No doubt JKR was careful to check that. 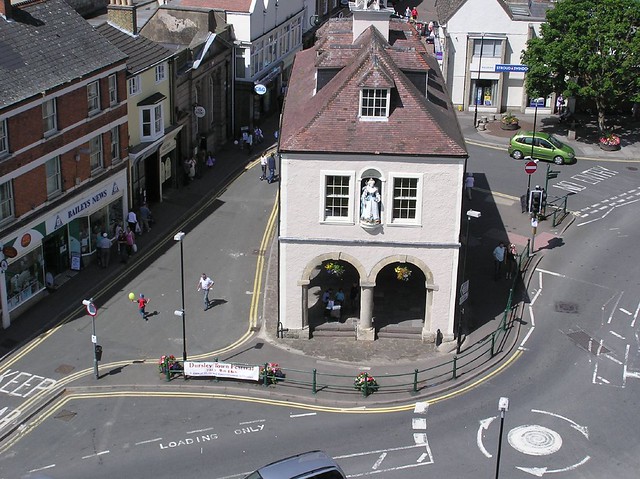 ETA 4th May 9.21am: All the other cities that have so far declared (four of ten) have voted No. But the Bristol turnout was especially low (25%), there being no council elections, and I suspect that will work in the favour of what we might call the Yes campaign (except that there was no campaign).
Collapse