This is my father's bush hat, which he wore in the Burmese jungle during the War. 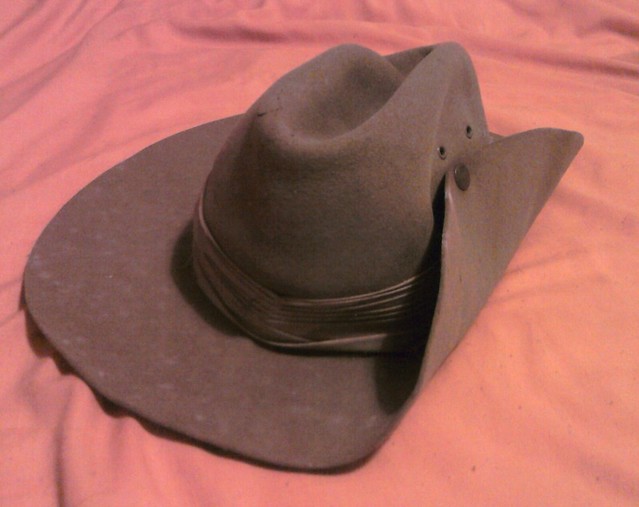 I'll come back to the hat, but you may be scratching your heads a little, for the last time we met my father he was firewatching during the Blitz, having just left his studies at the Quaker residential college, Woodbrooke, due to lack of funds. How did this paid-up Conscientious Objector find himself in the Army?

The truth is, I'm not entirely sure. It wasn't an immediate thing: I believe he didn't sign up until 1942, around the time of El Alamein, and as far as I was able to gather (I didn't press him on the point) it was largely because he felt life was passing him by, sitting on his hands in Kingston-on-Thames. But I hope and assume there was slightly more to it than that. Joining up also meant an end to his lifelong vegetarianism. His introduction to meat was liver, served for breakfast in an Army canteen. It was not an auspicious start to the relationship, but he was never a veggie again.

After a few weeks of basic training he found himself deployed to a posting in England, while one of his best friends had to his horror been posted to Burma. My father went to see the officer in charge, arguing that it would be better if they could swap places, since his friend had a wife and small child while he was unattached. Besides, he added, he'd always wanted to visit the sub-continent. "This is the British Army, not Cook's Tours," replied the officer with some asperity; but he switched the postings.

Again, I have only fragments of his time in Burma: he didn't talk much about it. He was in the Intelligence Corps (thanks to his facility with languages) working on decoding Japanese signals, I believe. He owned a goat, and used to dance with it, holding its little cloven feet in his hands and staring dreamily into its satanic eyes. The only other souvenir I remember from the War itself - apart from the hat - was a Japanese (or perhaps Chinese) dagger with an ivory scabbard and elaborate carvings of men in robes with droopy sleeves, which as a child I thought he might have stripped from the body of an enemy combatant, though it was quite possibly in fact a paperknife. I haven't seen it for years.

But his bush-hat he was careful to preserve, and recently I found a story, written by him in 1946 and carefully typed in violet ink (or ink that has faded to violet in the intervening decades), which may or may not shed some biographical significance on this fact.

Next to the story was a slip from Chamber's Journal, dated 4th January 1947, accepting it for publication for two guineas. He even preserved a second slip, dated 28th March, asking him to revise and return the proofs. Most touchingly to me, it was addressed to "T. Crawford Butler": he'd decided to use his middle name for literary purposes. There's no copy of the journal itself, unfortunately.

At no point during my childhood or indeed later did my father mention this story (as far as I remember), or show any interest in writing fiction, although he wrote poetry throughout his life.

I do wish he'd kept it up.
Collapse