I went to Oxford this afternoon to give a lecture on fantasy fiction to some charming Danish high school teachers who were there for a week's immersion in the Home of Fantasy. Mine was the final talk: they'd previously heard from such luminaries as Peter Hunt, Colin Manlove (or would have, if he hadn't been ill), Dimitra Fimi and Michael "Planet Narnia" Ward, so I had a lot to live up to. It all seemed to go well, though, and the sun shone until I arrived back at Didcot, where I had to change trains. (There used to be a direct Bristol-Oxford train, but not for the last decade.)

At Didcot, my train was late. It actually wasn't that late - less than half an hour, in the end - but it felt much worse because it started at just four minutes' delay, then crept up in slow increments of a minute or two (I counted ten of them), each of which was announced by a lugubrious female voice "Regretting to inform...". On the far side of the tracks a recorded male voice was giving similarly doleful tidings to would-be travellers to Oxford, until the station seemed an echo chamber of perpetual lamentation, like one of the less punitive circles of Dante's hell. This impression was only enhanced by the sight of Didcot Power Station's seething stacks: 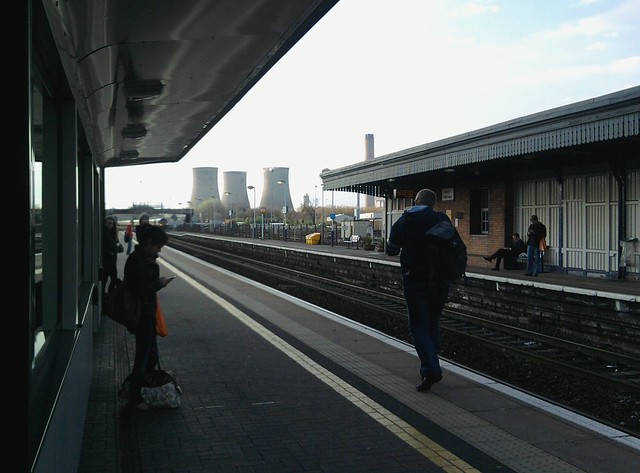 "I had not thought death had undone so many," I caught myself murmuring as a flurry of commuters passed by - a chute to the underworld worn glassy smooth by the pinstriped buttocks of Mr Eliot. Eventually the train came, and I sat in front of two Welsh women who were travelling on to Swansea. They were discussing Delia's latest recipes, and I wish to record here that there is no English phrase that shows a Swansea accent to better advantage (if it is said in appropriately slow, savouring tones) than "Blackened gammon with salted caramel crackling".
Collapse