When I first came to Bristol, long before I had a car, I lived in Mangotsfield on the north-east edge of the city. I spent a lot of my time tramping down the old railway cuttings, and was especially fond of Mangotsfield Station, already looking overgrown and archaeological barely a generation after its closure by Dr Beeching:

They say the Lion and the Lizard keep
The Courts where Jamshyd gloried and drank deep:
And Bahram, that great Hunter - the Wild Ass
Stamps o'er his Head, and he lies fast asleep. 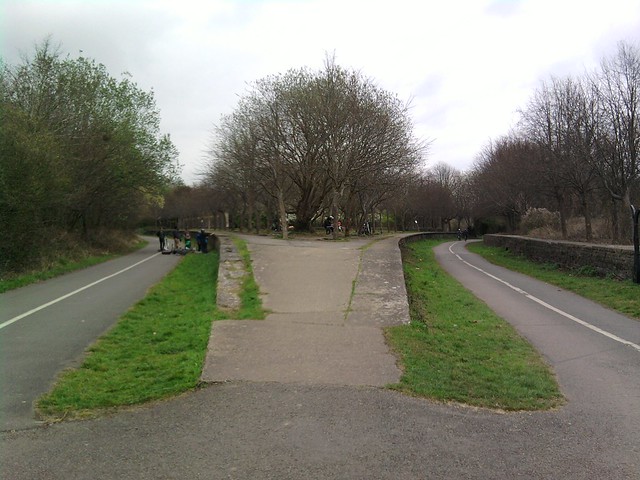 They've tidied it up since, as you can see, though there is still a spinney where the waiting room should be. The whole thing now forms part of a busy cycle path between Bath and Bristol. Until today, when it came on me to walk up from Fishponds, I'd not been back in twenty years, a little reluctant I think to see how it might have been sanitized into strangeness. Apart from the tidiness it was all very recognizable though, and it was pleasant to feel my memories being tickled with trout-like delicacy as I regreeted each unremarkable footbridge and tunnel. I'll go further next time, perhaps as far as Pucklechurch, which lies two or three miles on and was a favourite destination in the old days. My friend Alison and I would lunch at the Star Inn, which was no great shakes in itself but was the site (more or less) of the murder of King Edmund I in AD 946, and so had a grisly allure.

In fact, perhaps I should make a point of visiting all the places where English monarchs have been killed? I've already got the Rufus Stone, Berkeley Castle and the Tower of London in the bag, and I'm sure I've walked past Westminster Hall the Banqueting House at some point, so I'm doing quite well already. It seems an appropriately republican hobby.
Collapse