Okay, the greenest thing would be to grow my own veg, or failing that use the excellent local organic supermarket, but given that I'm too lazy to do the first, and can't afford to do the second all the time, I often find myself in a supermarket.

When I'm there, I make a point of looking at the Reduced shelves, for food that's near its sell-by date. There are often bargains to be had, and it's stuff that would otherwise be thrown away, so buying it is good for the environment too - a double win.

But a lot of fresh food still gets thrown out by the supermarkets at the end of each day, and this has got me wondering whether it wouldn't be eco-friendly to buy more frozen. Of course, the electricity represents a carbon cost, but less food gets wasted - along with all the energy that went into growing, processing, transporting and (perhaps) chilling that food.

I only have a fridge-freezer, so buying huge amounts of frozen food isn't an option for me, but as a general rule, is it greener than fresh - supposing you're buying from a big supermarket in the first place? I've no idea how to figure that one out.

A few days ago I mentioned in a comment that I had Huguenot ancestry. I believed that to be the case at the time, and I think I had some excuse, as the people I had in mind do crop up on web sites devoted to the Huguenots. However, having done a bit more poking around I find the truth to be otherwise. I do have French ancestors (Jean René Giberne (d.1706) and his wife Marie, my 6*great grandparents) and they were refugees of sorts, and it did happen during the troubles following the revocation of the Edict of Nantes, and they were Protestants, but I don’t think it would be fair to call them Huguenot refugees. Why not? Read on...

The Giberne family were minor nobility from the Cévennes, which, as those of you with an interest in such things will know, was a stronghold of the Calvinist Camisards. It's true they were involved in the religious wars of the late 17th and early 18th centuries, but on the side of Louis XIV, not the Protestants. The head of the family at that time was Louis, Sieur de Valotte, and it was he and his son Francois, an infantry colonel, who caught the brunt of the Camisard rising in 1702. Their castles of Cremat and Gibertain were burned that year, and in 1705 Louis was executed by the rebels after a “mock trial”.

Some years before the trouble broke out, however, Louis’s uncle Daniel (my 7*great-grandfather) had wisely moved to Brittany, where he became Sieur de Beauchesne and fathered three children, including Jean René. Daniel himself was a sixth son, but so many of his elder brothers died without issue that he appears to have inherited a good deal of money. Unfortunately, none of it went to Jean René, since Daniel disinherited him for making a love match without his consent. (The money eventually went to Jean René’s niece Amador Anne, and thence by her marriage into the coffers of the already-wealthy du Parc family.)

Jean René may already have been living in England by the time he was disinherited, because his marriage to Marie Le Mennet of Saint-Lo (assuming there wasn’t a previous one) took place in London in 1691. However, it seems just as likely that he and his bride-to-be fled the parental wrath to a different jurisdiction expressly for the purpose of getting hitched. At any rate, in Jersey, perhaps en route, he is said to have renounced his Catholic faith, and the church where they were married (St James Dukes) was an Anglican one, so it does sound as if all these things happened in quick succession, and were probably connected. In England they remained, and they seem to have become such firm Anglicans that one of their sons (Daniel Gabriel Giberne (1692-1749)) ended up as a Prebendary in Lincoln Cathedral. Here’s Daniel's tombstone, in Ashley, Staffs, where he is praised as a stout defender of King, Country and the Church of England: 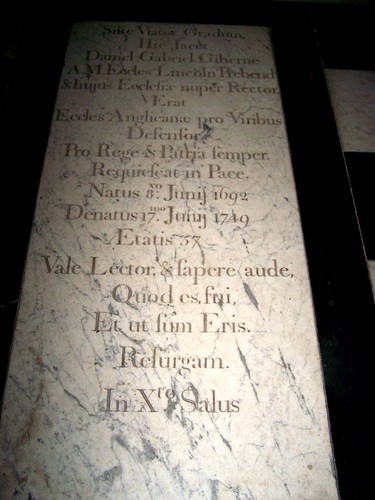 So, in Jean René Giberne we have a French refugee (but from his father, not the King or Church), who was a Protestant (but an Anglican, not a member of the Reformed Church of France), from a family that was involved with the Camisard rising (but on the side of Louis XIV, not the Protestants). He’s a kind of anagram of a Huguenot, perhaps?

I’m doing a bit more Giberne prodding, so there will probably be some more bits and bobs in a later post. (On which note, I've just got hold of Jean René's will, in French and in English translation. I'm not great at reading early eighteenth-century handwriting, so if anyone enjoys that sort of thing, feel free to have a look.)
Collapse