Time passed slowly, or seemed to do so. The year 1857, in which, according to Dr. Cumming's prophecy, the world was in all probability to come to an end, came and passed.* Nothing special happened. I was thinking about the prophecy when I was in the Cloister before the Hall door, having the Bluecoat School Cap on my head. Mr Brooks inspected us the certify that the cap was used. Two events happened in the years about this time. One was an eclipse of the sun which was invisible to us and disappointing, for a holiday was given to us and we all wasted our time waiting to see it, and spent a penny at Mr Fletcher's shop on a piece of red glass through which to behold it. The other event was the passage through the sky of a large comet with an immense tail, I think in the year 1861.** In this year I became of the 10th of June 15 years of age, which was the date for me to leave Christ's Hospital.

I left the Ancient and Royal Foundation four days before my time for no reason excepting that my Father at my request asked permission, and my desire was granted.

After leaving the School I went to other Schools, had private tutors, and, inspired by a book, "The Student's Guide", studied fervently many subjects.*** By this time, very fortunately for me, the oculist-profession had invented spectacles to suit my sight, and for a short time I went to a Bank. I kept up acquaintance with my Old Blue friends for a time. I saw Green at Boston where he was a Bank Clerk. Jeffery visited me in South Kensington at my Father's house. Sanders called upon me at my College, Highbury, where for three years I was trained in Holy Orders.**** I met him again at Bethnal Green. Afterwards my duties as a clergyman took me to various parts of the country, and in the long time that followed I gradually lost my knowledge of these Bluecoat boys altogether.

It is suggested by a friend that I should make a comparison between Christ's Hospital in my time and Christ's Hospital in the present days, but this I cannot do, as I cannot undertake to re-enter the world and school again in order to have experience of the present. Everything everywhere, I am told, has improved, and therefore at Christ's Hospital. I am quite ready to believe this, if told so by another for it is what I earnestly wish, but general hearsay I cannot state as a matter of my own knowledge. I asked for an instance of improvement, and was told that now Christ's Hospital boys are allowed to wear towny clothes in the Holidays. But I cannot decide that this is an improvement. Does the Christ's Hospital boy of the present generation dislike his dress? It is comfortable. We, Christ's Hospital scholars of the old time, had no objection to the humour of the City Arabs who called after us; it simply amused us. Do the girls of today want to dress like boys? If they do, would the change be an improvement? I must leave these questions for the present generation to decide. A more important question is:- is brutality and selfishness in the world giving place to gentleness and lovingkindness? In spite of exceptions I am glad to think that on the whole there is a gradual improvement which will continue to take place in the great mass of our British nation and those nations which have sprung from her, and that eventually it will be a model for imitation by the rest of the world. 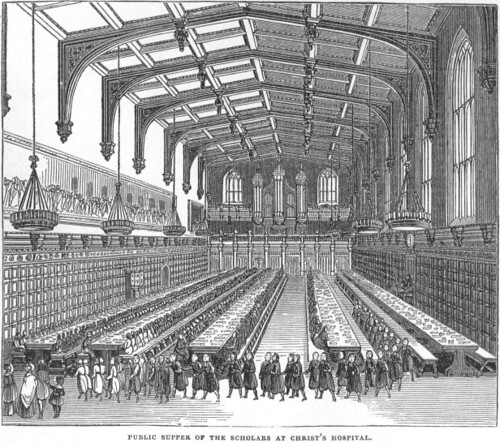 So, there we are. I'm quite sad to have come to the end of TRB's account. But I've only transcribed about half of it, in fact. I plan to finish the job as and when I have a spare moment, and to publish it using Lulu or something similar in the not-too-distant future. Watch this space!
Tags: family history, tom butler's schooldays
Subscribe