When a boy at Hertford was ill, or felt ill, he went to the Surgery of the Sick Ward to be examined by Dr Stone. If the doctor admitted him as an inmate, he was at once taken into the Sick Ward, and he had not even the responsibility of giving any notice to the Matron of his Ward which he had left. ... I was sometimes in the Sick Ward for a considerable time. What the ailments were which I suffered I do not know. Perhaps I never knew their names. And is it wonderful that a child should take no interest in such forbidding subjects as diseases? Besides, in this delightful place, pain was swallowed up by pleasure. The boys were very happy in the Sick Ward, and would have liked to live there always. There was delicious wholesome food, kind nurses, a warm comfortable room, a long table at which I read Dickens' "Pickwick Papers" and some good evangelical tracts. I liked the tracts, and thought that "Pickwick Papers" was a charmingly amusing book. The title page was missing, and I wondered who wrote it. When Dr Stone examined me after I had been for some days up and said that I was not strong enough to attend school yet and must remain in the Sick Ward for another week, the "woosent luxent" news filled me with such joy that I was afraid it would recover me too soon, and cause Dr Stone to change his mind. At this stage I had quinine every day at eleven o'clock, and I looked forward to the hour, for I was very fond of this tonic. Nowadays doctors are more shy of quinine than they used to be, having discovered that it may be bad for the heart. ...

Dr Stone once gave me a sudden sharp pain, but I had no doubt that he did so for my own good, and I was interested in his treatment. According to the instruction of my nurse, I lay on my back on the counterpane of my bed with my body bare and near the foot of the bed. I compared myself to a little balloon. Dr Stone, as he passed, gave the front of my body a sudden vigorous smack, and without any pause, continued to walk on to the door of the Ward, and went out.

The Sick Ward was a delicious relief to the scholars of Mr Keymer from their daily funk for him. But one day he made his appearance there. He came not for any pastoral purpose, but merely to persecute one of the patients. He said to him so that all the Ward could hear, "Yo'er shamming toe bay al. You've come here just beycause yer don't want too come to School. Vary wal. I shall raymember yow when yo come back again!"

On Sunday the children of Christ's Hospital, attended by their nurses, were taken to Hertford Church. Some of my Ward, No.8, liked to take hold of the hand of Mrs Meredith in starting for the country walk leading to it. [I have done this same walk via Google Street view, from SG14 1PB to SG13 8AE. It is no longer in the country....] On the way we heard the fine pealing of the Church bells, but I am sorry to say that, being hungry and miserable, I did not enjoy their music. The beautiful scenery of the scotch mountains did not obtain appreciation from Dr Johnston [sic], and probably because, in his time hotels were few and far apart and he could not get sufficient nourishment to give him the spirit to enjoy it. ...

On the Evening of every Sunday Mr Keymer came into the Hall and read prayers and afterwards preached. The Girls of the Hertford Bluecoat's School also were present. The bell to announce service was rung for a considerable time although everyone was present except Mr Keymer. Between the prayers and sermons he left the Hall to change his surplice for a black gown and solemnly returned to the pulpit. The girls were from seven to eighteen years old, and sat in a row in such order that their heads formed a straight line verging to the ground. Those who were about seven were very interesting to me, and some were attractive, but those who were older were too big to please me. ... Smallness makes some atonement for the plainness of little girls, and causes ordinary defects of feature to be less forbidding. The age of the greater part of the girls was greater than that of any of the boys. I thought that some of the older girls were rather plain, one or two dubiously passable, and some even ugly. Perhaps the environment of a hard school-life was not favourable to the retention of good looks. It may have soured the disposition. ... However, Sunday evening was very pleasant to me on account of the presence of the little girls, one of them especially, and I rejoiced when they came into the Hall, and was sorry when they went out again.

Mr Keymer occasionally preached a funeral sermon. That was when a boy died. It was called "a jolly sermon" for it pleased the children to hear him speak kind words of the departed. I never heard the word "jolly" used at Christ's Hospital except on this occasion. "Jolly" was thought by the boys there to be the mild effeminate slang of school-girls, though strange to say, girls used the word much because they thought it was the slang of school-boys. I cannot recall anything of a funereal sermon of Mr Keymer, except the following words:-

"Hay was a varry good boy and always larnt has lassons wal, and af yo want toe go toe Havvn yo must bay like ham."

I can recollect one of the sermons of Mr Keymer. Although the girls were present, he was so rude as to speak of the flogging of boys with the birch rod. This I thought as indelicate as if he had spoken of the use of the birch by Miss P. and Miss L. for the punishment of the girls. The boys had great pity for the girls and believed that the greater part of them were almost angelical, and the rest of them far better than boys and too good to deserve this brutal treatment, though it was rumoured they frequently had it. At my early age I had never been acquainted with any girls except my sisters and they were apparently faultless. ... 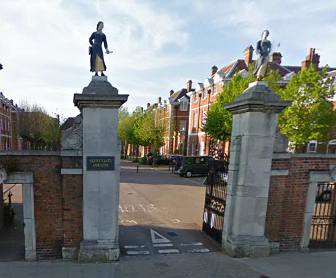 At the age of 9 TRB was moved to the main site of Christ's Hospital in Newgate, London.
What did he find there? Find out in future thrilling episodes of
Tom Butler's Schooldays
Tags: family history, tom butler's schooldays
Subscribe