sovay asked about the "Seven Saints of St. Pauls" murals I mentioned in my last post. As I was out today, I had the opportunity to photograph four of them. Expect the other three in due course... 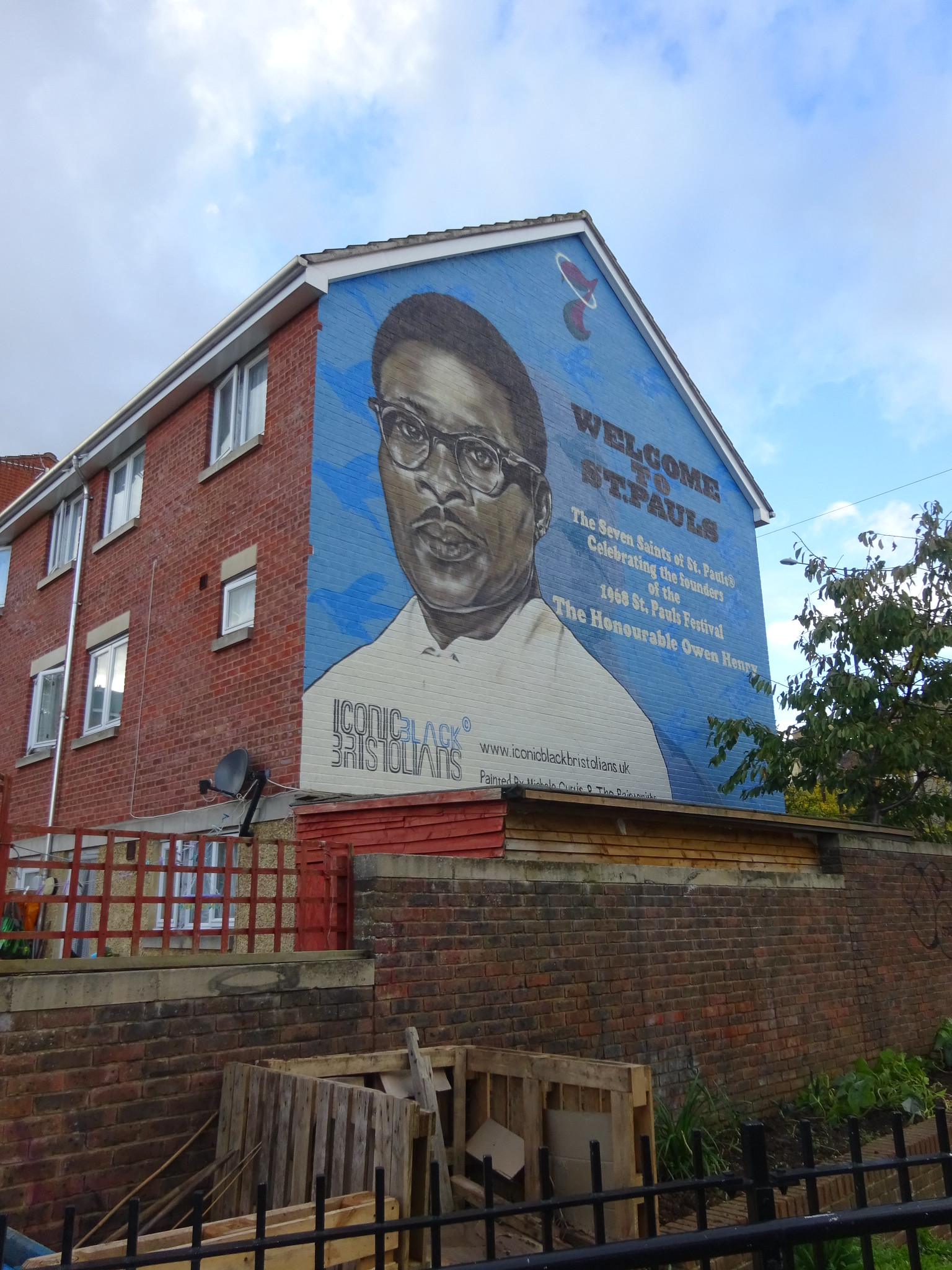 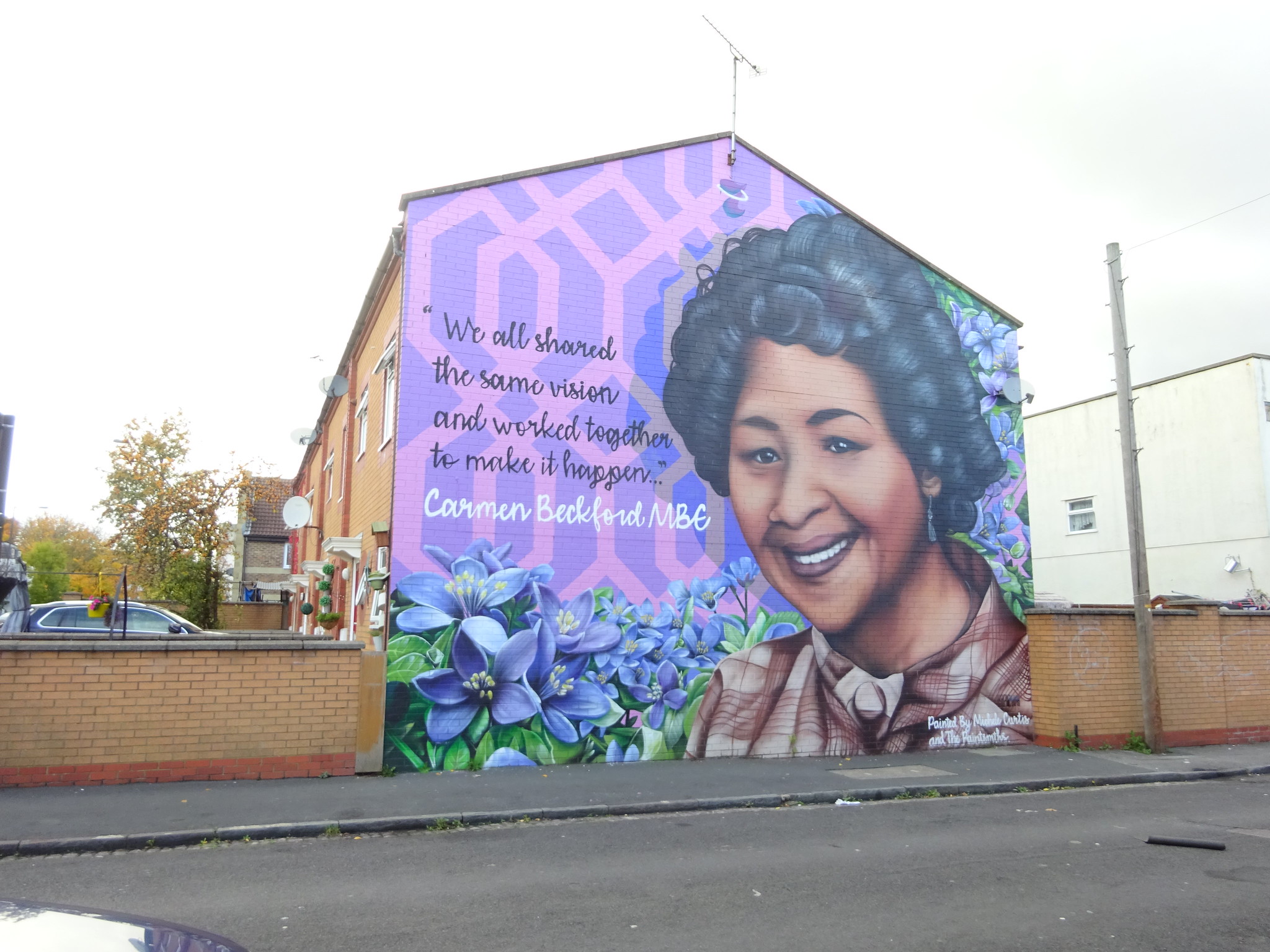 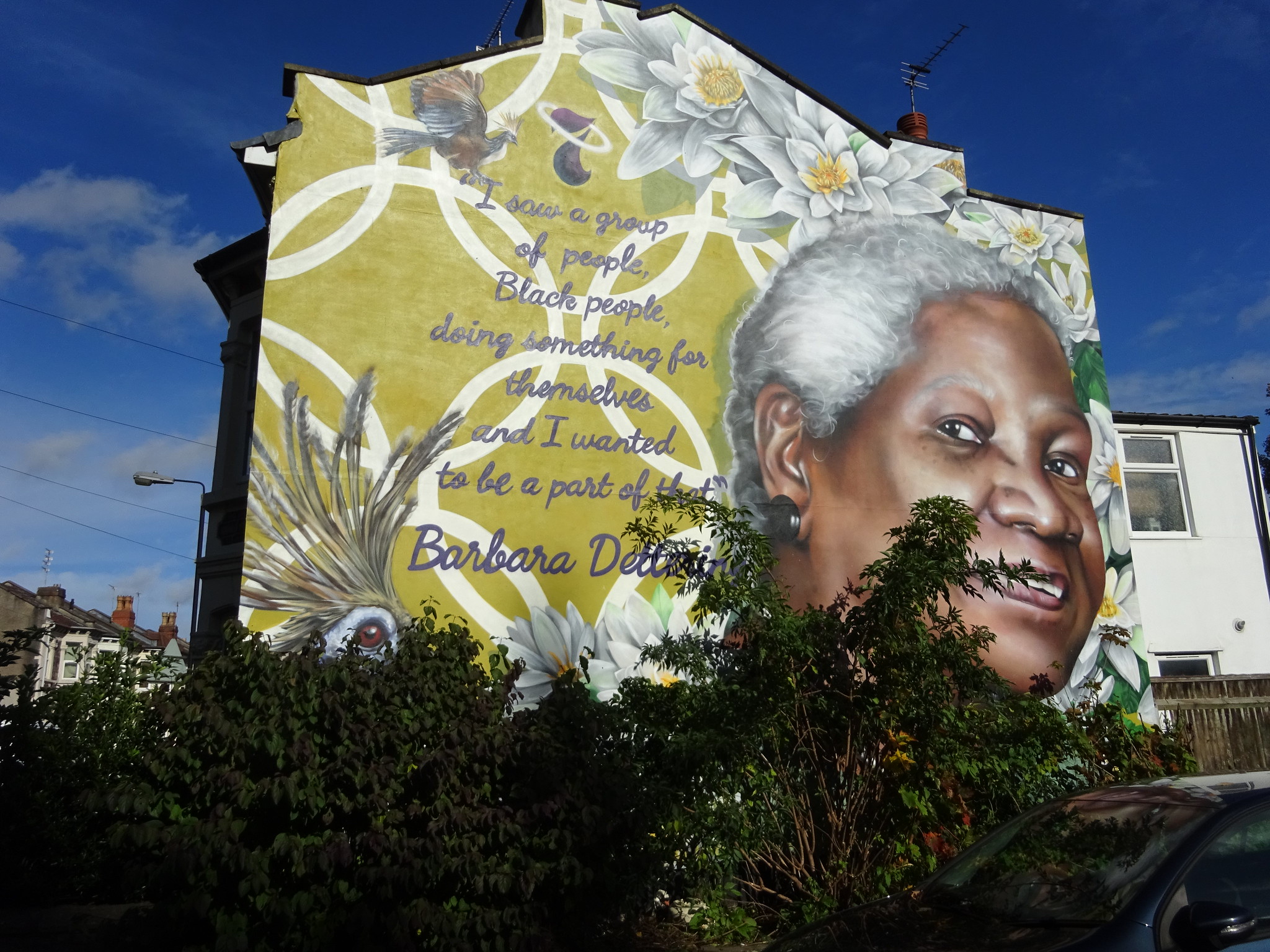 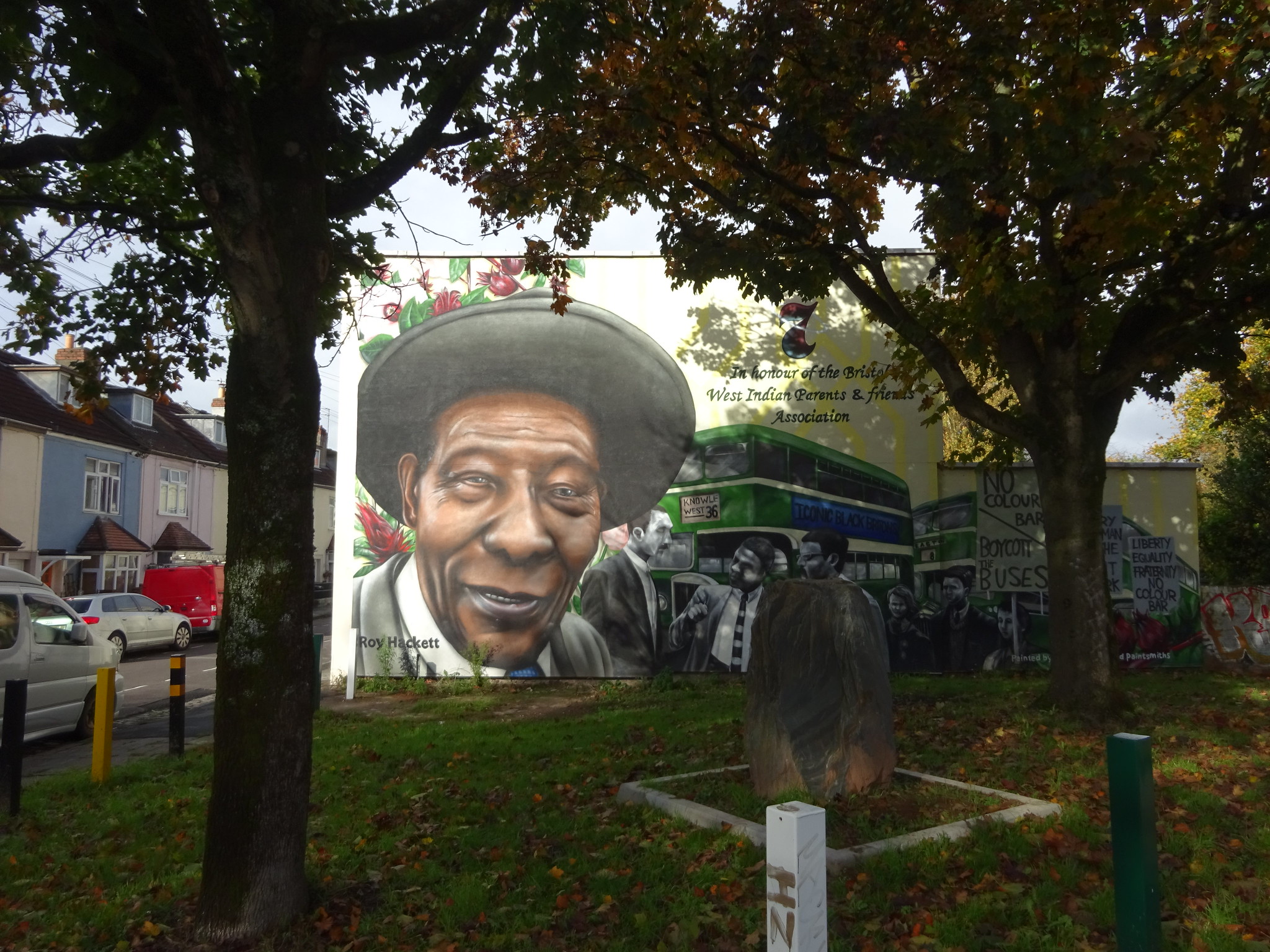 The area I just moved to has long had a large West Indian population. The St Paul's Carnival is a fixture, and its route goes past my house. There are handsome murals scattered around, featuring the local activists known as "Seven Saints of St Pauls." As someone who is almost painfully white (in culture no less than in melanin), I was a bit worried about being a fish out of water, or even resented as part of a wave of gentrification. As to the latter, it probably helps that my house was built on a disused car park: I've not priced anyone out of an otherwise-affordable home, at least. Everyone's been pretty friendly, and a bit curious about this new row of houses - which are indeed rather striking.

Today, as I was about to cross a local street on my way to town, a swish-looking limo drew up to the junction. The driver gave a couple of honks on his horn, which smacked more of "look at me!" than "be careful!" The impression of celebration was increased by the two large pink feathers that stuck up from front of the bonnet. Was this a birthday? A hen do? A wedding? It all seemed cheery and festive anyway, and I grinned at the people inside as they passed.

A few seconds later a second limo passed, also with pink fluffy feathers. Only this one was unmistakably a hearse. The deceased party's name was spelt out along the side in what looked rather like pink and white icing. After that, about twenty more cars followed. I belatedly recognised the feathers as a stylised echo of the plumes worn by horses in funeral corteges of yore. The people I'd been grinning at had of course been the grieving family.

What did they make of my expression? Perhaps they saw it as an attempt at encouragement at a difficult time; perhaps, more sinisterly, as undisguised glee.

The truth is of course that they almost certainly didn't give it a thought, but still, how mortifying.

Well, I moved house almost two week ago. I'm still living in a world of boxes, of course, partly because unpacking them is a lot of work, partly because I'm still in two minds about where to put their contents (mostly books). The day of the move coincided with the beginning of the semester, always a busy time, but especially in a year when I'm in charge of the largest first-year module and many students are going in and out of self-isolation because of you-know-what, necessitating moves from classroom to online teaching and back.

The good news is that I'm doing all this from home, being one of those spared classroom duties, in part on account of my advanced age. Not that I think of myself that way, but I suppose I may as well take the pros with the cons of the world slowly coming to such a view about me. The other day I was on the phone to "3" about getting 4G broadband, and mentioned that this had been my daughter's idea, the cable broadband at this address being poor. The person at the other end responded: "Perhaps I could speak to your daughter?"

My daughter thought this hilarious, of course, as indeed it was; but still, a foretaste of things to come...

I really like the new house, by the way! Photos will follow in due course, when it's a bit less all over the place.

Meanwhile, as a sorry-present to make up for a fortnight's absence, here's a very short article on that villain Hamlet, which I recently wrote for The Conversation.

In a couple of days, all being well, I move about a mile and a half, from Ashley Down (on top of Ashley Hill) to St Agnes (at the bottom). Confusingly, Bristol actually has two districts called St Agnes: mine is the one that abuts St Pauls.

When I turned over the October page of my Moomin calendar a few days ago, I was not surprised to find that it showed a tall thin house, rather more characterful than the one I'm moving to, but still, I like to think, its spiritual twin. 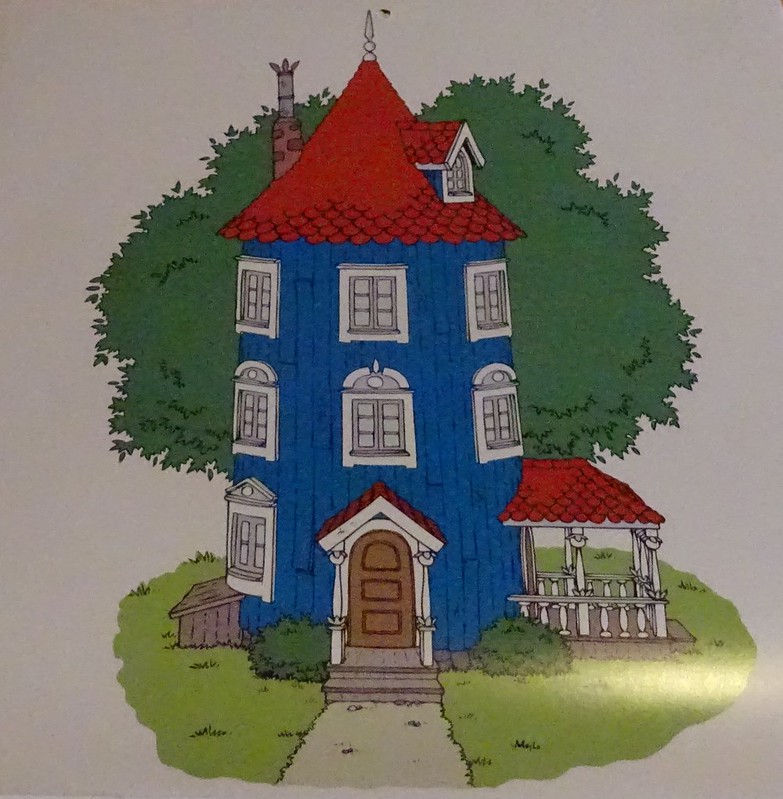 That Moomins calendar has been a kind of sortes virgilianae for me all year. In March, it weirdly predicted the onset of lockdown, toilet-roll hoarding and all: 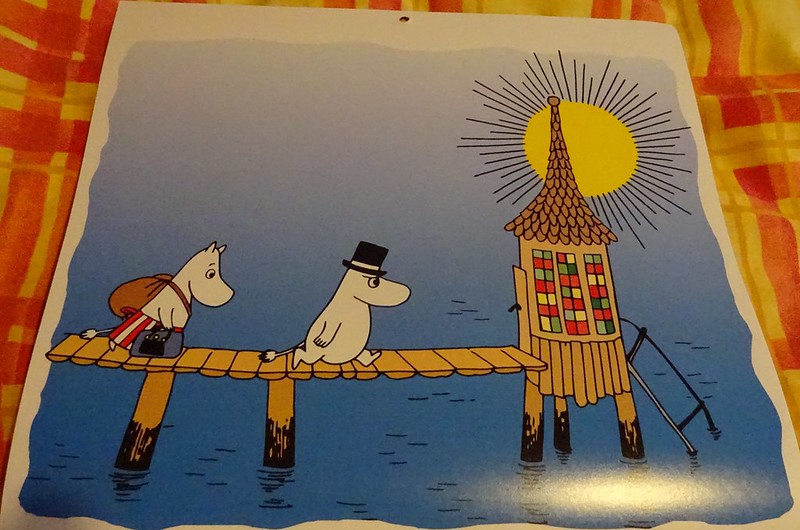 Despite stocking up, by the following month, Moomintroll and Snufkin had been reduced to using the three-shells method - or at least to working out what it might be. (This didn't actually happen to me, but only thanks to my Brexit stockpile.) 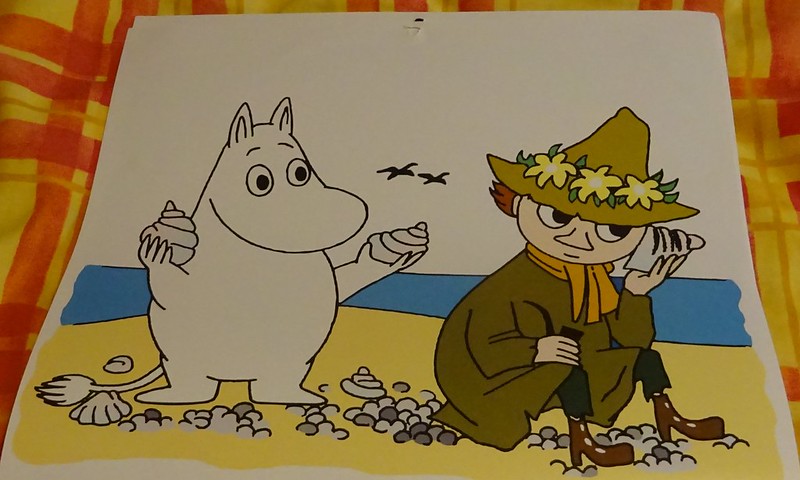 And in May, when I was taking woodland long walks in Stoke Park and around Purdown (see entries from that time), Moomintroll similarly was hugging a tree, as if for comfort. 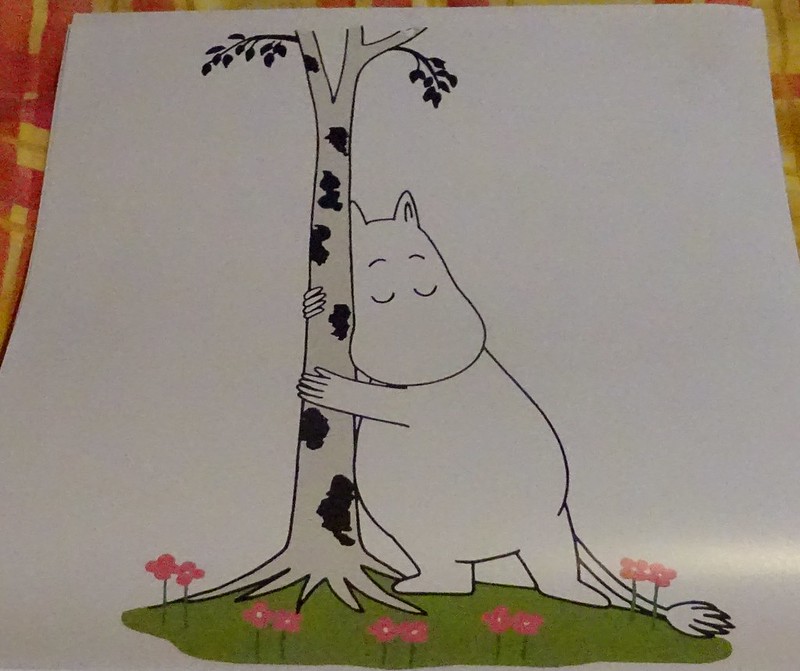 What will November and December bring? The only downside to being at the bottom of the hill is that my new house is right next to a river, and the Moomins don't have a great track record with flooding...

I've exchanged contracts on a new house, and will (COVID-19 willing) be moving in on Monday! This is very pleasing after such a long delay - my offer was first accepted all the way back in January - but naturally it happens to fall on the first day of the new semester, so these are proving to be rather busy days...

All the same, it's hard not to get a little distracted by some of the things I keep discovering as I pack. Like this, for example - perhaps my grandfather's first ever publication. Aged 16, in 1901, he took to the letters pages of The Vegetarian to engage in a protracted correspondence about the relationship of vegetarianism and Christianity, of which this is the opening salvo: 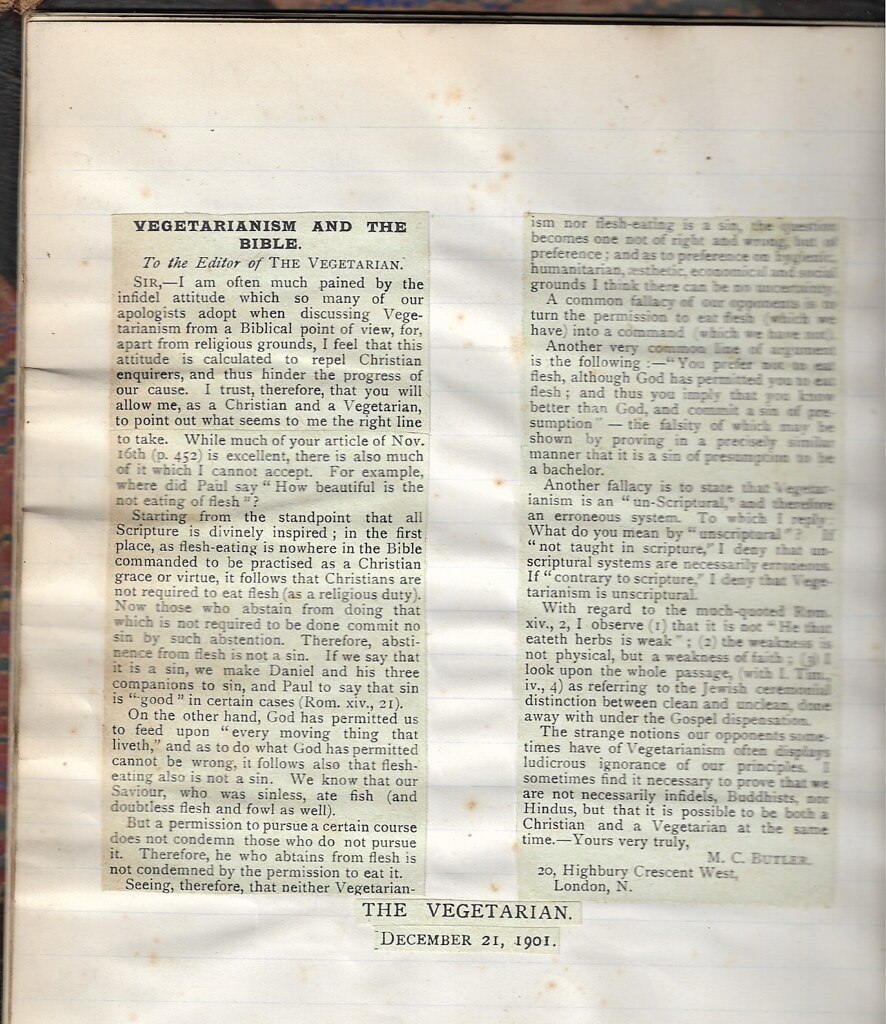 But I must get back to my packing!

(If you would like my new address, by the way, feel free to message me.)

I rather like this view taken from Dolebury Warren yesterday, looking along the line of the Mendips towards the Bristol Channel and Wales beyond. The distant lump on the left is Brean Down, and in the centre, more distant still - Steep Holm. 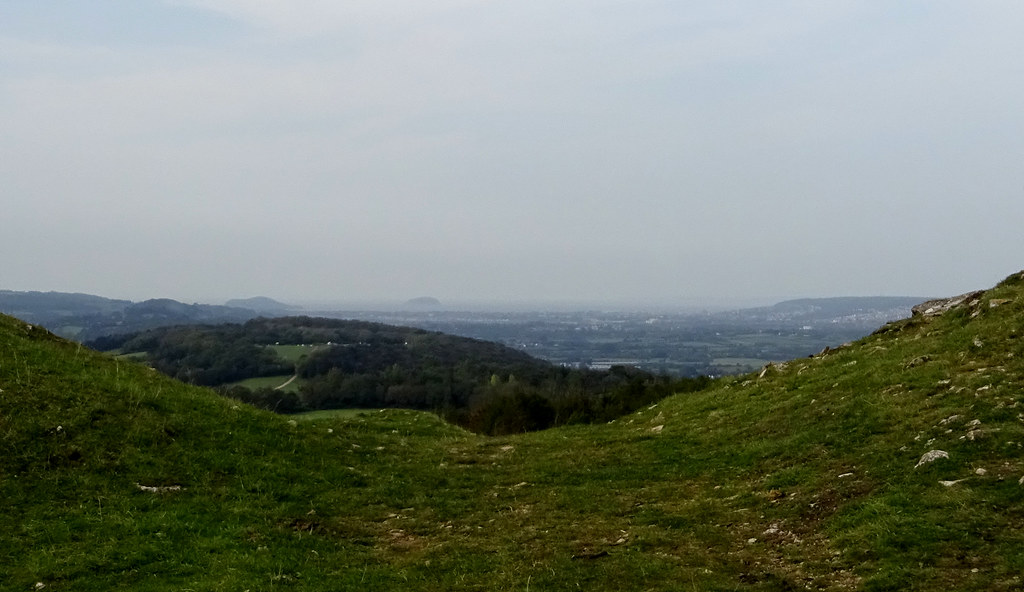 Before the lockdown, Ayako and I visited Diana Wynne Jones's son Micky and his wife Noriko, mostly to catalogue the books in DWJ's study. While we were there, they kindly let me photograph the original "Fire and Hemlock" picture, which inspired the novel of the same name. Today, they even more kindly gave me permission to post the photograph, which I do here: 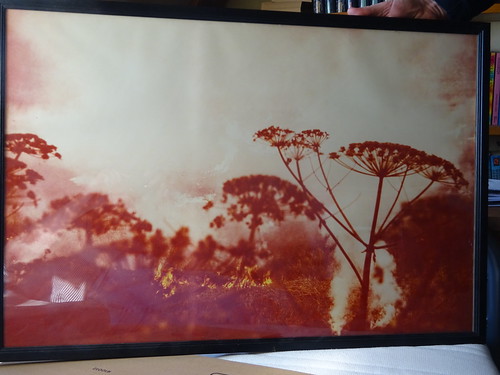 As you can see, mine is not a great photograph: there's reflection from the glass, the angle's wonky, and the picture is in any case somewhat faded from having been hung in sunlight for some years. Still, hopefully it gives you an idea.

Micky mentioned that the photograph was not unique: Diana had bought it from a studio, but it was one of a limited print run. Perhaps, if I did a Google image search, other (perhaps more pristine) copies might turn up?

I just tried that, and, by some kind of ambiguous magic, up popped this album cover: 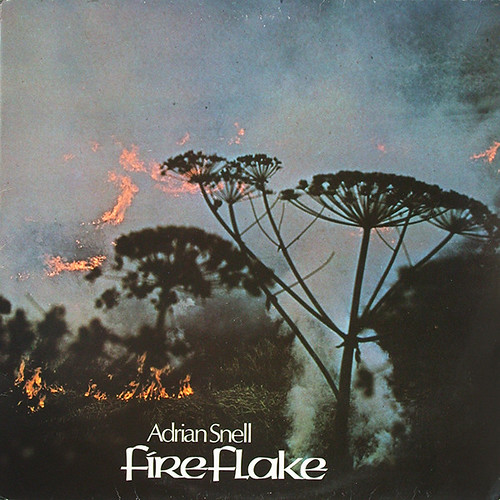 This is the sleeve of the Adrian Snell's debut album, Fireflake (1975). You can hear it in its entirety here, should you wish, but probably the list of track titles will give you a sufficient idea of its genre:

In some ways it's hard to imagine a more inappropriate set of songs to hum along to while watching those strange figures loom in and out of the fire, threatening to take you back down that not-so-bonny road to Hunsdon House. Adrian Snell is certainly not one of the acts Seb was so into. Still, I'm sure that DWJ would have been amused by the juxtaposition.

Bristol is a city where temporary art often pops up overnight like midnight mushrumps. Recently we had the statue of Edward Colston replaced - for a day - with one of Jen Reid, while a couple of weeks ago members of Portishead, Massive Attack and others took to the skies to serenade the city from hot-air balloons in an event by the ever-creative Luke Jerram.

A couple of days ago this sculpture appeared in a niche opposite a multi-storey carpark - a young person being comforted by a Winnie-the-Pooh style bear. I saw it in the paper, but today I walked over to look at it with my daughter. 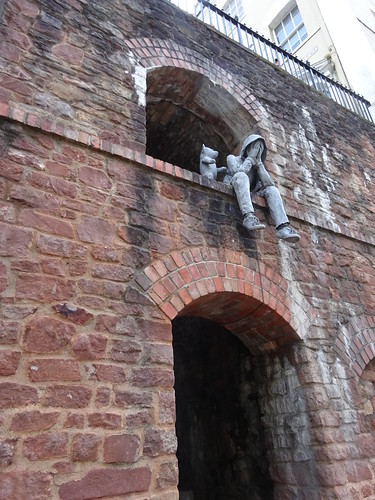 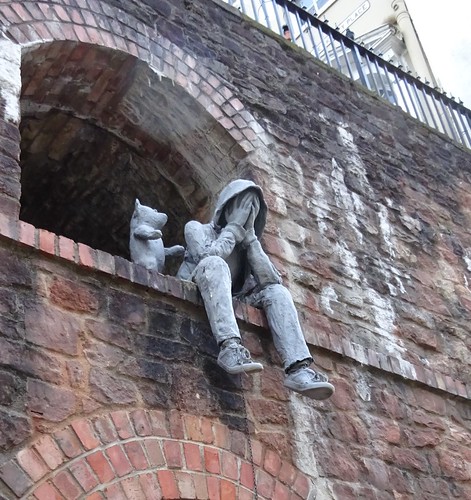 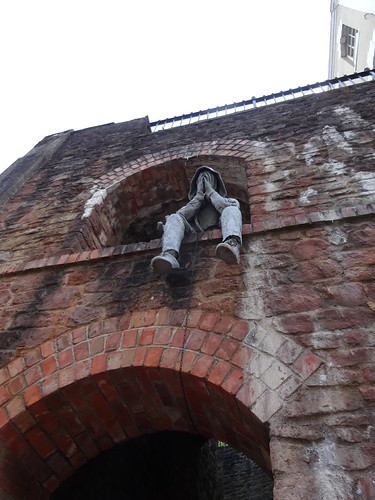 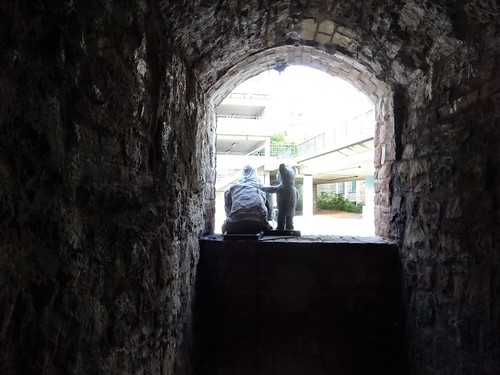 I find it a strangely moving piece of work. I expect that it too will be ephemeral - but aren't we all?

I've not posted lately, largely from lack of matter, or rather of motivation (coruscating squibs about the political situation project a continual firework display against my cerebral cortex, but I mostly don't share them because to point out the criminality of people committing crimes in plain view seems otiose), but also because my life in the last couple of weeks has been in a weird suspension.

The people I'm meant to be buying a house from told me to expect to move on 28th August, and I accordingly started turning my own house upside down in readiness, while busily preparing online lectures and seminar materials against the imminent arrival of students eager to learn. However, for various non-too-clear reasons the move got delayed, and I now don't expect it to happen for another month, i.e. well into the new semester. Having a few days without internet will be an interesting experience in Week 1, as I prepare to lead the core first-year module by the medium of online seminar.

Meanwhile, I just heard Louis Bird on the radio, talking about how he was commuting from Bristol to Cardiff to work on some "terrible TV show" and felt that his life was in a rut and that he simply had to follow in his father's footsteps and become an ocean rower. I can't say that the same commute has had that effect on me so far; on the other hand, at this point I haven't been to Cardiff for six months! Perhaps the ocean-rowing bug will bite only once there's a vaccine?

Fun fact: the Japanese for vaccine is "wakuchin" - pronounced something like "whack chin." It's easy to remember - just picture someone receiving an upper cut.

The other day I received a very nice present from my friend Chiho: a set of karuta cards based on famous lines from「千と千尋の神隠し」, i.e. Spirited Away 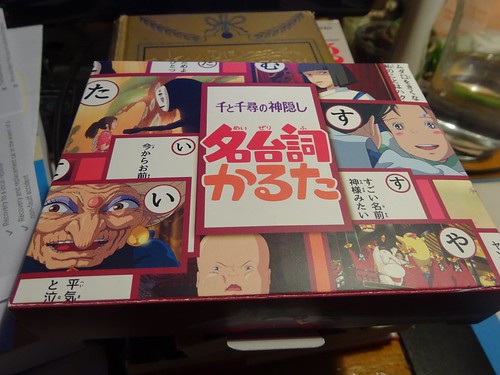 I'm a late developer, and Spirited Away was the first Ghibli film I ever saw - or, at least, saw properly. (In retrospect believe I may have come in halfway through a showing of Laputa on television at an earlier date: I remember thinking that, if this cartoon was an adaptation of the third voyage of Gulliver, it was certainly a loose one...)

Anyway, I loved Spirited Away, and it raised many questions in my mind, among them being:

a) Why do they drive on the left in Japan, when usually only countries that were in the British Empire do so?

I wondered these things fleetingly during the film, but they evidently didn't weigh heavily enough for me to find out the answers immediately on leaving the cinema. It was only years later, when I started learning Japanese, that I discovered the history of British involvement in the development of Japanese railways, and (more importantly for me) the on-yomi/kun-yomi distinction in the pronunciation of kanji. When I did learn these things, though, I remembered my former puzzlement with all the urgency of a crumb of stale madeleine finally being dislodged from my teeth.
Collapse